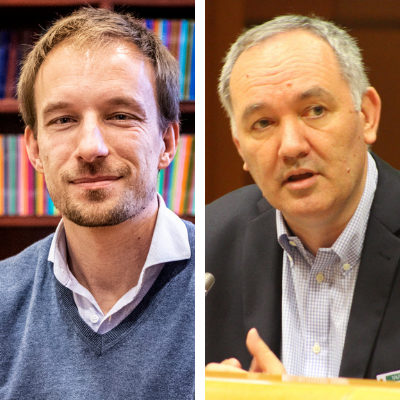 Beginning with the next course, Jose Ignacio Garcia, currently the regional Director for Europe of the Jesuit Refugee Service, will become the Director of the Center for Studies
09/04/2021

Jose Ignacio Garcia will be the new Director of the Cristianisme i Justícia Center for Studies beginning with the next course, replacing Xavier Casanovas who has occupied that post for the last seven years.

Jose Ignacio Garcia is a Jesuit, born in Madrid in 1964. He entered the Society of Jesus in 1983. He is a theologian and economist. He studied Economics and Business Administration (ICADE) in Madrid. Between 1992 and 1994 he was sent to Malawi to work with the Jesuit Refugee Service (JRS) by accompanying the refugee population of Mozambique.

The trajectory of his experience has been closely tied to social action and commitment to justice, either from the point of view of research, reflection or direct action, and also with a great concern for the question of ecology. For ten years he was a professor at the University School of Agricultural Engineering in Valladolid (INEA) where he turned his attention to themes dealing with the environment.

During these last years he has lived in Brussels where he has worked at the head of two international institutions of the Society of Jesus. Between 2009 and 2016 he directed the Jesuit European Social Center (JESC), heading the work of this center for research and investigation in the areas of migration, climate change and social justice. Also, he has been the delegate for the Conference of European Provincials in matters of social justice. Beginning in 2017, he became the regional director for Europe of the Jesuit Refugee Service.

He has participated in the last General Congregations of the Society of Jesus: CG 35, in 2008, which elected P. Adolfo Nicolas as Superior General; CG 36, in 2016, which saw the election of the current Superior General, P. Arturo Sosa.

He will now be coming to an institution that he knows well because between 2016 and 2018 he was a member of the Board of Trustees of the Fundacion Lluis Espinal (Lluis Espinal Foundation) to which the Center belongs, located in Barcelona. There will also be a change in the associate directorship which will now be held by Santi Torres, while Jaume Flaquer will continue as head of the area of theology and as director of the journal Selecciones de Teologia.

For his part, Xavier Casanovas, who is leaving the directorship, will undertake a new professional phase in the Chair of Ethics and Christian Thought of IQS. During the seven years that he has been the director of this entity, the Center has consolidated its work in the area of dialogue between faith and the struggle for a more just world, being careful to update its reflection with the new challenges that are posed by the world of today. It has also been a time of increasing the public profile, of growth in the number of projects, and of intensification of the work with other institutions and movements. In the last few years, the Center has increased its digital footprint with new audiovisual materials and the implementation of the possibility of offering online courses.

Mystagogies of the Spiritual Exercises 500 years afterwards
Penultimate words: reality and hope
Time and Reflection
"Why Haití?"
Presentation of the "Forgotten Conflicts" campaign